What Is Acid Reflux?

However, the reflux itself does not necessarily lead to gastro-esophageal reflux disease symptoms or histologic changes, and can occur among healthy individuals as well. In this case, the process is referred to as “physiologic gastroesophageal reflux”. 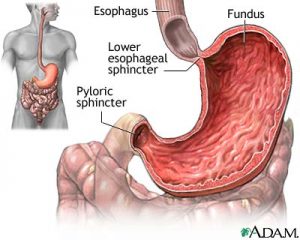 The second acid reflux disease predisposing condition is a lower esophageal sphincter (LES) malfunction. The LES is a 3-cm to 4-cm ring of muscle, which is two to three times thicker than the proximal esophagus and acts as a valve between the esophagus and the stomach.

Gastro-esophageal reflux disease is usually experienced as a persistent (at least twice a week) heartburn. Heartburn is the burning sensation in the chest or throat, caused by refluxed stomach contents touching the lining of the esophagus.

Since healthy individuals may also experience light reflux – occasional heartburn is common as well, and doesn’t necessarily serve as an evidence of GERD.

Does This Sound Familiar?

This happens due to continuous stomach contents acid flow that comes into contact with the esophagus and causes inflammation of the esophagus resulting in scars from tissue damage.

Untreated acid reflux disease can lead to serious health complications. Those include stricture formation, bleeding, ulcers and esophageal spasms. When the stomach acid reaches the upper esophagus and trachea, the process can result in a variety of severe conditions, such as asthma, sinusitis and pneumonia. 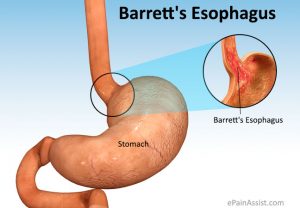 Finally, some people may develop Barrett’s esophagus, a condition that manifest in an abnormal shape and color of cells in the esophageal lining. This condition is a precursor to esophageal cancer, especially in adults over 60 years old.

An undergoing surgery should be considered very carefully, since it can compound some underlying conditions, such as stricture and motility disorders. Medical treatment of GERD includes PPIs and H2 blockers.

While acid reflux can be treated by taking prescription medications or acid blockers such as the above, bear in mind that the results may be temporary and that some conventional medications can cause serious side effects.

From a holistic point of view, acid reflux disease is considered a warning sign of a major internal imbalance that needs to be properly addressed. Therefore, alternative remedies, such as homeopathic remedies, herbal remedies, lifestyle changes as part of a complete holistic regimen are strongly recommended for acid reflux sufferers.

If you want permanently reverse the root cause of heartburn and acid reflux and naturally and dramatically improve the overall quality of your life Click Here.

Finally a Natural Remedy For Acid Reflux That Works

Can Prebiotics Supplements Also Be An Acid Reflux Remedy?